Instead of a Typical College Experience, NYHS Alumnus Heads to the Navy

Jack Benjamin (’20) is currently training to be an electrician mate nuclear for the United States Navy. 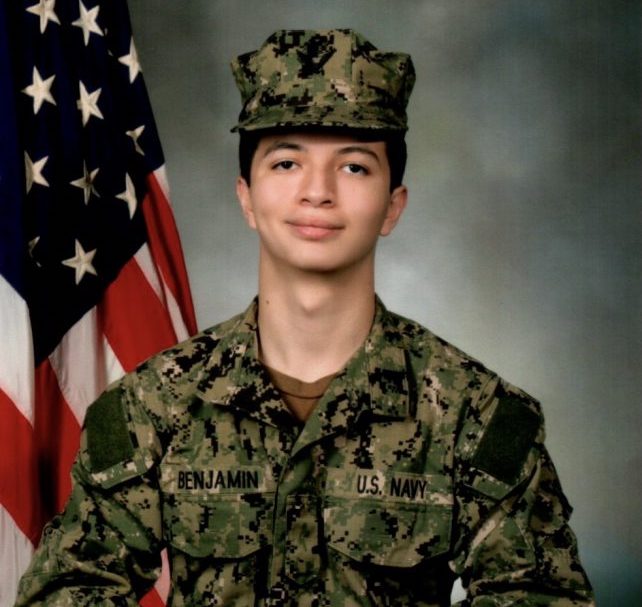 While the rest of his class applied to various gap-year programs and universities, Jack Benjamin was researching other options. “I went to all those college briefs when they came to school, and none of them really sounded that interesting,” Benjamin said. “I didn’t really know what I wanted to do.”

Benjamin’s initial exposure to the Navy was a pure coincidence. One day, recruiters from the US Navy showed up to NYHS to speak about program options. “Jack had expressed possible interest in a military career so we made [sure] to pull him from class to meet with them, but it was happenstance that the recruiters ended up at NYHS,” said NYHS college counselor Beth Davis.

“Ultimately, it was my decision. I just saw a really good opportunity and I was like, this kinda sounds like the perfect program for me,” Benjamin said. “I thought I could gain a lot from this.”

After completing various placement tests throughout his senior year, Benjamin graduated from NYHS and shipped out to a base in Illinois on August 19th. There, he completed a two-month boot camp required for all naval soldiers.

At boot camp, Benjamin woke up at 6 every morning. He attended classes on naval history and general life skills. “You’re going from a kid to an adult in the span of two months,” Benjamin said. “You learn how to iron your clothes and even how to shave properly. Literally, one day for like an hour, [a commander] went through with each person and showed them how to shave.” People from all types of backgrounds join the military, he explained. “Some of these people that go through boot camp might not even have a dad that’s around to teach them how to do stuff,” Benjamin said. “They have to teach you everything.”

Boot camp also consisted of intense physical training. “The hardest part for me was running,” Benjamin said. A former Navy Seal in Benjamin’s division helped him tackle his running challenges. It’s “all mental really,” said Benjamin, “just not stopping and pushing yourself. I ended up doing really well on the run.”

Benjamin is currently in Charleston, S.C., where he’ll be in school for two years, learning advanced math, science and other necessary material to prepare him for future work as a nuclear electrician. In a year, Benjamin will go to “prototype,” which is when soldiers practice their jobs on stationary ships.

After that, Benjamin will spend four years as a nuclear electrician on an active naval ship. The nuclear reactor powers the entire ship, so Benjamin’s job is to ensure the ship is powered properly.

Benjamin decided to go into this area because of the career opportunities it provides. “I felt like my job will be more applicable outside in civilian life,” he said. Many nuclear electricians go on to work at companies like Google, Tesla, and SpaceX.

For his training, Benjamin could be stationed at US naval bases anywhere in the world. “The better you do in school, the more priority you’ll have in choosing your spot,” Benjamin said. “I’m trying to go overseas, whether that’s Japan or Italy. That would be cool.”

Benjamin advises current NYHS students—especially those who aren’t interested in the traditional four-year college path—to listen to everything. Keeping an open mind while talking to the recruiters made all the difference in his post-high school plans.