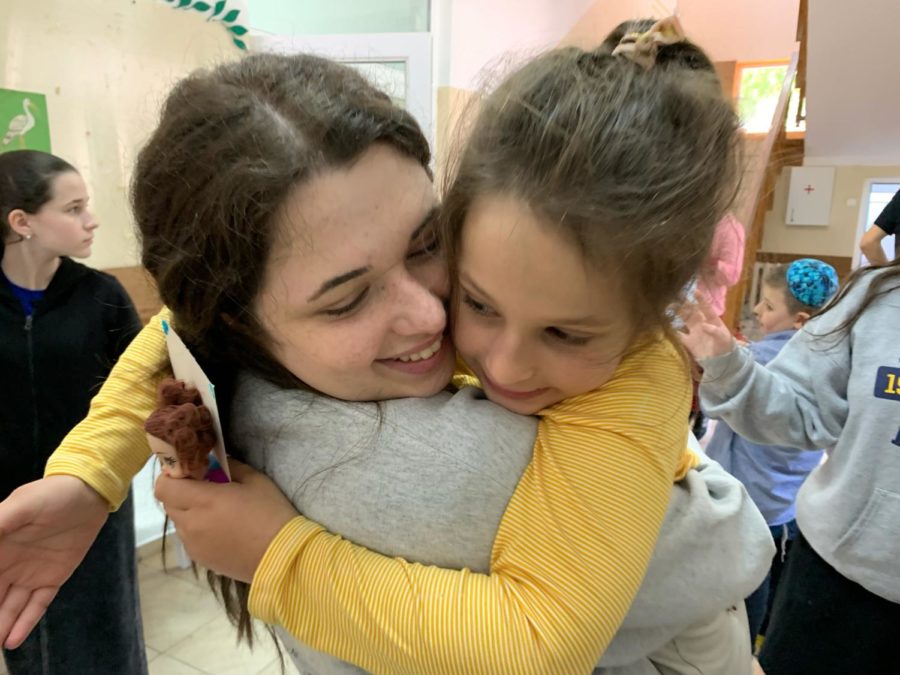 One queen sized bed and a loveseat couch fill a small, muggy hotel room in Neptun, Romania, where five young Jewish Ukrainian girls are living. Musical cartoons play on the television in the background. Dozens of medicines and first aid supplies line the countertop near the sink. It’s 8 p.m., and six senior girls from NYHS are there to say goodnight.

The Ukrainian girls, ages two to five, wear matching pajamas. They leap into the girls’ arms, latching on and begging them to stay.

“It’s so immediate, they don’t think about it.” said senior Anna Benoliel, one of the NYHS students there that night. “It was effortless making connections with these girls.”

Several members of the NYHS senior class were  in Romania to assist a Jewish Ukrainian orphanage called Tikva Odessa that had relocated from Odessa, Ukraine, due to the Russian invasion of Ukraine. Tikva Odessa takes in homeless, abandoned and abused Jewish children from  Odessa and around the country. About 300 children are currently housed in a hotel in Neptun, a seaside Romanian town.

The idea for the trip began on the seniors’ service trip to New Orleans two weeks prior. Rabbi Eitan Katz, director of NCSY Relief (the group that brought the seniors to NOLA) was approached by the Orthodox Union about sending a group to help. When Katz told Head of School Jason Feld about a Jewish orphanage in Romania in dire need of help, Feld jumped at the opportunity.

Katz had a difficult time getting in contact with Tikva. All he heard from the organization was that they needed help. The lack of communication meant that upon arriving to Romania, the students were unaware of what they would be doing with the children.

What they did realize was that the orphanage was in serious disarray. All residents were housed in a multiple hotels, adults and teenagers smoked outside in the middle of the day, kids played on scooters and rollerblades without helmets through the parking lot and hotel lobby, babies cried, and children wandered aimlessly.

“We soon realized these kids aren’t [scootering] because they thought it was super fun, it was because they had absolutely nothing to do during the day,” says Galit Berezansky. After school ends at 1 p.m., the children have no schedule because Tikva is so understaffed. “The result was complete and utter disorganized chaos,” Berezansky said.

The seniors saw firsthand how the kids craved structure and substance in their days. Most mornings began at school to pray, learn, and play. Students were pulled out of class one by one to receive some much needed individual attention.

Back at the hotel, the seniors spent all day with the children. The NYHS students joined the community for meals, ran activities in the hotel, and were bodies for the kids to hug.

“Creating handshakes and developing inside jokes with the kids, even in such a short time and with the language barrier, was very impactful,” said Victor Maimon.

Although the trip happened in late May, relationships with the kids remain strong. Frequent Facetime calls and Instagram stories keep the connections intact. The continued communication has also deepened the seniors’ understanding of the fallout of the war and its effect on children.

Benoliel formed a particularly strong relationship with a 14-year-old girl named Karina. “I started texting Karina while we were there, and that’s how we communicated, because we don’t speak the same language,” Benoliel said. “Ever since then, not a day has gone by without texting her. It’s the first thing I do in the morning and the last thing I do at night.” WhatsApp automatically translates Anna’s texts to Russian on Karina’s phone and Karina uses Google Translate to send messages back.

Unsure of the impact they could make in only a week, the students learned that relationships were the most important thing. “The smiles on [the children’s] faces towards the end of the trip were incomparable from when we first arrived in Neptun,” Berezansky said. Upon leaving, many children asked the volunteers when they would be returning. Leaving proved challenging to the volunteers, too.

“It was difficult, because a lot of us know we want to go back and don’t know when that will be,” said Harrison Feld. “I hope the next time I see these kids will be in Odessa, but the uncertainty of that makes things even more painful.”  Feld made sure to tell the kids that more groups would be coming to keep their spirits up.

Although more groups are on their way, the children feel a special connection to the NYHS group, the first one to visit. “The kids here are having challenges with the separation,” Katz told the NYHS students after they returned to Seattle. “[The Tikva staff] feel that the children’s sadness is a sign of success and marvel how amazing and wonderful such strong bonds were made so quickly.”

“I know 100 percent that I will be back, and this trip was not a one timer, not an experience to check off a box,” said Benoliel. “It’s something I never want to forget.”