NYHS bees get another chance

Following the death of the first hive, the school tries again. 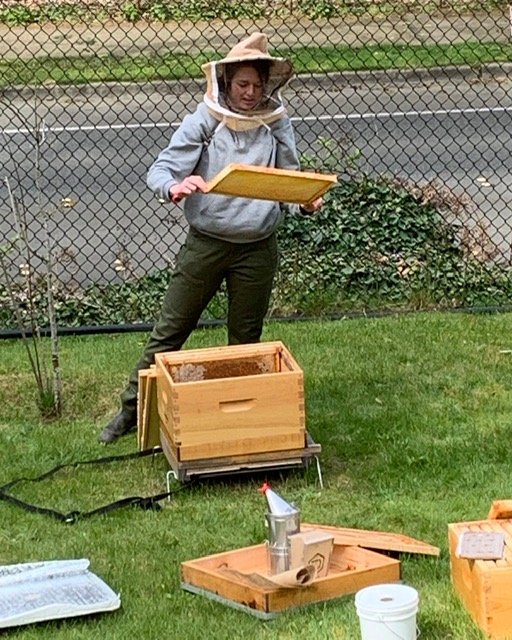 Honey bee populations are declining rapidly in the United States. To help with this problem and as part of its mission of tikkun olam (repairing the world), NYHS installed beehives last spring.

“I know that bees are endangered in the U.S., and [as] organizations are working to rehabilitate the population, they are looking for spaces to have hives,” said NYHS Head of School Jason Feld. Feld saw that NYHS could play a part to rehabilitate the bee population, and learned that about 80 percent of food supply relies on bees. “It was a major wake-up call for me, and I think it is a great learning opportunity to learn about maintaining the hive and the bees,” he said.

About 12,000 bees arrived at NYHS in early April with the help of Alveole, a Seattle-based beekeeping company that works with schools, corporations, and other organizations to install urban beehives and enhance people’s relationships with nature. Annie Reading, the Alveole beekeeper who works with NYHS, feels that having bees and other wildlife on school campuses is important primarily for hands-on, real-time learning and experience to help the students be involved with wildlife preservation and conservation.

“The ultimate goal is to get more students more actively involved in different aspects of kibbutz hatsafon,” said Feld, referring to his concept of making the school a kind of Pacific Northwest educational kibbutz. NYHS currently has chickens and some vegetable gardens as part of this mission. “Whether it’s feeding the chickens and collecting their eggs, harvesting and packaging honey in the fall, planting and working the vegetable garden, which could be a great service to the community, I would like to see the students more involved with that,” Feld said.

With the arrival of the bees last spring, many teachers took the opportunity to use the hive in their lessons. NYHS’s Rabbi Naftali Rothstein and former teacher Josh Meisel taught a unit about the kashrut of honey to give students an association with the school’s bees and the opportunity to connect their Judaics learning with nature.

However, close to 50 percent of hives in the U.S. don’t survive a full season due to factors including disease, climate change, habitat loss, and pesticides. Around late February/early March, Reading checked on the bee habitat, and what was once a complex unit has been reduced to thousands of dead bees piled on top of one another.

I was pretty bummed,” said Feld. “We’ve been checking regularly on their health and they seemed to be doing very well, but our beekeeper informed us that it’s more common than one would think.”

After inspecting the bees, Reading found that the habitat was infested with a parasite called the varroa mite. “They are a kind of parasite that is destructive if they’re able to reproduce and then feed off the bees and spread diseases,” said Reading. Although the varroa mite was the primary cause of the bees’ death, the weather was also involved. Bees maintain a hive temperature of 95 degrees even in the winter by generating heat together. “Their population had gotten so low from the mite that they couldn’t regulate their heat,” stated Reading.

“I was feeling down about the collapse of the beehive this semester,” said NYHS science teacher Ben Legel, who participated in implementing the beehive. However, Legel wasn’t too discouraged, since typically a beehive’s health has to be very good to make it through the winter.

On April 12, Reading came back to NYHS and installed a new bee habitat. “This year,” she said, “I’d like to do a varroa treatment by giving them a medication to kill off whatever might come.”

Rothstein said he doesn’t have a set Judaic studies plan for the next year to incorporate the bees, but he said his goal is to include learning about tza’ar ba’alei chaim, which is a Torah value that involves respecting and not causing any pain to creatures.